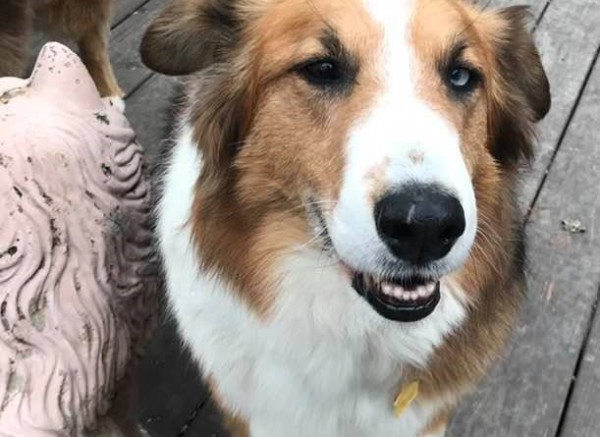 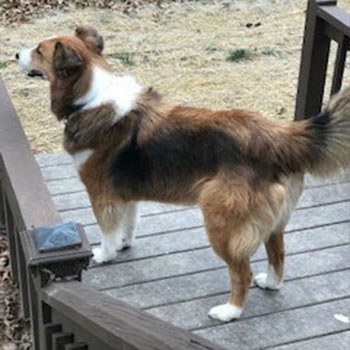 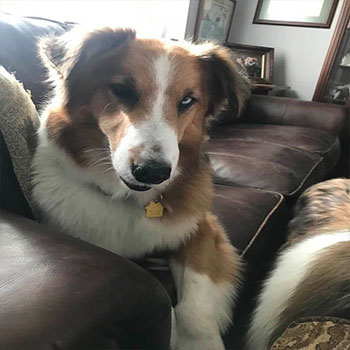 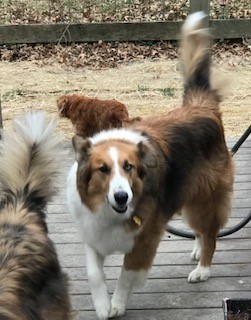 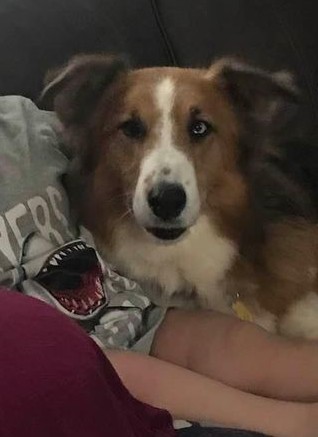 Lacy came to TSCR as an owner surrender.  She lived on a farm and the fact that she felt like chickens and rabbits tasted like….well chicken and rabbits did not sit well with the neighbors.  Her family felt like suburban or urban living may be better for her long term.  She is an adorable collie, may have a little something else mixed in, but definitely has the collie personality.   She was said to have jumped fences in her former home but has not offered to do so in her foster home.  We think it is because her outside time is supervised and she wants nothing more than to be with her family.   She came to TSCR at 45lbs with prominent ribs and spine and has gained up to 52 pounds.  She still eats like it is her first meal in days, but she doesn’t go after the food of the two other dogs in her foster home.  She is 22″ at her shoulders. Her ribs can still be felt, but not as much since she has gained some weight.  Lacy went to the groomers a couple weeks ago and behaved beautifully; the groomers all loved her.

ith her being an outside dog previously, we weren’t sure if she was house trained.  It took a couple days, but we now know, she pees as soon as she eats.  Hence, she goes outside in the fenced yard right after she eats and hasn’t had an incident since.  Lacy goes to the door when she needs to go out.  She does stay in a crate when her foster is gone, which isn’t often since she works from home, but we don’t want to tempt her to chew on something inappropriate that might be in front of her.  When home, she is either lying next to her foster mom’s chair or on the couch next to her.

Lacy has been eating a salmon and sweet potato grain free diet.  Her coat is a nice shiny dark sable. The foster feeds her at 6am, 5pm and 9:30-10pm.  Lacy gets a cup full of kibble at each meal, and a handful of kibble as a treat when she comes inside after going out in the yard to potty or when she goes in her crate.  She willingly goes in the crate when told to “crate”.

Lacy loves attention, particularly from her foster’s 6-year-old granddaughter.  She adores her, sits next to her on the couch, plays with her. She loves anyone that comes in the house, does not bark at them, and as long as she gets attention right away, doesn’t jump.  If she is ignored, she will get more boisterous and jump.  She loves her foster’s son-in-law and will jump into his lap as soon as he sits down.

The first vet that saw Lacy estimated she was 8 years old, however, the vet who saw her recently says she may be 6 or 7.  It is hard to estimate, but she has a lot of spunk. Lacy is not greying and is very active so we think younger is probably the case.

Lacy walks well on a leash and rides in a car comfortably.  She has pushed her way out the front door a couple of times, however, came right back in the house after a lap around the cul-de-sac.  That was when she first arrived, and she hasn’t done it in weeks.  If you think you may be the right fit for Lacy, please fill out an application.