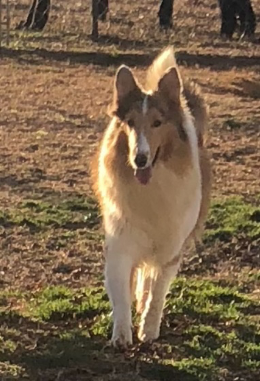 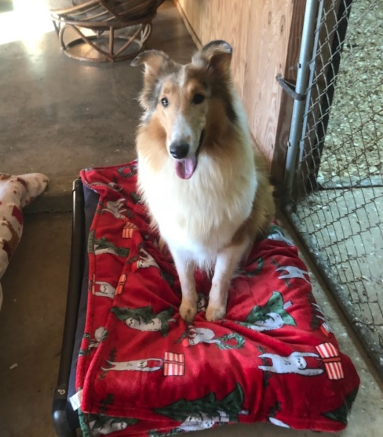 Jillian is a bit of an enigma. She is a beautiful sable merle who we obtained from someone indicating she was a lovely family pet.  She was a bit timid, but that is expected when meeting new people but within about 45 minutes of being in her foster home she jerked out of a martingale collar and squeezed through the vertical posts in an aluminum fence and was on the run 2 weeks. She acclimated to her foster family, started coming out of her shell a bit and then following a few weeks of seeing some progress, she pulled out of a collar when she was on a walk and heard a loud noise. This time she wasn’t out long and actually allowed the daughter from her foster family to walk up and put a slip lead on her to go back home. Her foster family and the rescue definitely wanted the best for Jill so we decided to send her to one of our fosters who actually trains and certifies therapy dogs. We felt if Jillian would respond to commands and had better recall it would be much easier to work with her. Her foster family also did some research through some vet work that accompanied Jillian and the vet let us know Jillian had actually come from a breeder.  He had been to the home and the dogs there were maintained in outdoor pens. This certainly explained the lack of socialization and also something we were soon to learn.

Jillian’s current foster operates a training and boarding facility so Jillian gets in-home time and then spends the majority of her days in play yards, the training facility or just generally bumming around with several other dogs. She seems to thrive in this environment, which seems to bridge the gap between strict Kennel confinement and being strictly and indoor companion pet.  She seems to thrive on the structure and schedule and enjoys being “a face in the crowd” rather than having someone’s undivided attention. She does love attention, but wants it primarily when she is competing with other dogs to get it. She will gladly wiggle her way to the head of the class for pets and the ever fantastic bum scratch. However, if you single her out by calling to her, she believes you could potentially be up to something sinister and she will avoid you at all costs. In the right situation, Jillian is an absolute love bug but is going to need someone who reads her well and understands her idiosyncrasies.

Jill does enjoy toys with her friends but is much more likely to pick up and want you to play ball with her. It is not a fetch situation, but she wants you to toss it her way and then she grabs it and runs around with it seeing if anyone might be interested in it as well. She does love the karunda bed and it is generally her favorite place to just hang around. Jillian is currently sitting when instructed inside and she is tolerating a leash. It is not her favorite thing, but she is amenable to taking a walk when you or being guided somewhere when wearing one. If she sees that you have one though, she is quick to make her way to another area in hopes that you are not planning on hooking her up.

Jillian will not be available for adoption until she is doing better with recall and has a reliable “sit, stay”. She is doing very well and we would love to place her in a situation similar to the one in which she is currently doing so well. Jillian is a Country girl and does not prefer city life. She needs to be in a relatively rural situation where there is a secure 6-foot fence for play and elimination and where she would be leashed when outside the confines of the fence. She definitely would prefer a multi-dog household with a consistent schedule. She is used to the noises of farm equipment and animals and they do not seem to bother her at all. If you think you may the perfect situation for Jillian please us the “Contact Us” button so we can discuss and so that you can speak with her current foster. The secure 6 foot fence for Jillian is a must as well as having other dog(s).